Shortly after World War II, the three Slezak brothers Andy, Ray and Bill started making products for others in the basement of their home on Concord Avenue in Akron, Ohio. Soon they outgrew this space, and, with the help of their father Andrew G., they built from the ground up a small shop on Waterloo Road in 1949. They named the company “RJS Products and Development” using the initials of Ray since starting the company was his idea.

The brothers were all graduates of Garfield High School in Akron and later attended The University of Akron with Ray and Andy studying engineering.  The company on Waterloo Road was struggling and when Ray graduated from college in 1950, he went to work at Firestone Tire and Rubber following his father’s footsteps where he had worked for many years.

The brothers expanded the business on Waterloo Road changing the name of the company to RJS Product Company, Inc. on March 28, 1957.  During this time, the primary products were a welding gun and aluminum siding cutter.  In 1959, Ray received his third patent for a Portable Welding Gun which was the major product for the company until the mid-1960’s when RJS began the manufacture of machines for the tire industry.

In 1959, Bill sold his stock and left the company to pursue a career in education.  Because of increasing need for space, in 1966, the company acquired land in Green, Ohio, where they built a larger facility and changed the name to RJS Corporation on April 11, 1966.  From 1965 to 1975, Ray patented several machines including its sentinel product – the Tension Controller.

In 1984, Andrew G. passed away leaving the company in the hands of Ray and Andy until Andy’s retirement in 1992 and later passing in 1996.

Over the years, the company on Massillon Road in Green, Ohio, has expanded several times with enlargement of the primary factory in 1975 and 1986.  Additional buildings were added in 2007 and 2012.

Ray continued to work at the company every day until his passing in 2014 at the age of 86.  In all, he was granted 21 patents for innovative ideas for tire manufacturing and material handling including his completely self-powered conveyer belt guide system.  His tension controller design prevails as the industry standard throughout the world. 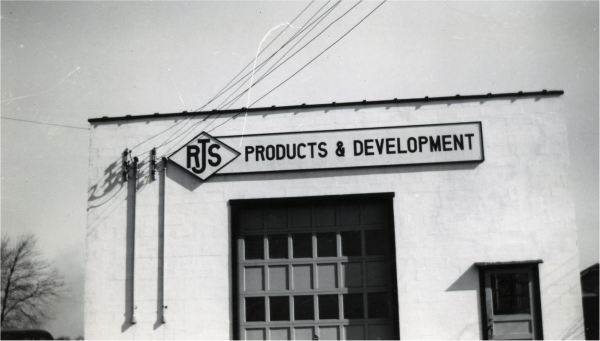